Another day, another adventure!  Today I am proud to say that we saved the lives of 7, yes SEVEN crawfish!  We spotted them in the seafood section of HEB and couldn't resist.  Harrison was hilarious hiding behind total strangers as I held one up and said, "Don't eat meeeee...aaaaahhhh!"  Everyone around the vat of googly-eyed and very aggressive little morsels came alive.  Grown men were sneaking up and goosing elderly strangers who were eyeballing the hundreds of red pinchers just begging for someone to get close enough.  It was a hoot!  I grabbed the tongs and filled a little bag with some and tossed them, writhing, into the cart.  Harrison was beside himself.  "What are we gonna do with them, Mom?" I can't lie, I was really planning to take them home and boil them up for an experimental sauce to go with the salmon we were having for dinner.  There is one I really like at Pappadeaux that I have been wanting to try to recreate.  Then when I saw the look on Harrison's face as I explained to him how we were going to cook them, I just couldn't go through with it.  And I am no bleeding heart liberal.  I can look a deer right in the eye and see venison as I'm pulling the trigger.  But putting a live crawfish into a pot of boiling water...I couldn't stand it!  I had already bagged the little mud bugs and was heading to the check out when I came up with my plan to liberate them from the fate they would surely face if I didn't go through with the purchase.  The check out girl was horrified and wouldn't even touch the bag.  It was great! 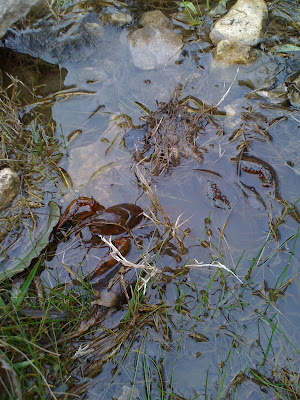 Here they are, the lucky seven, digging into their new home in the creek near our house.  Better than a boiling pot, wouldn't you say? 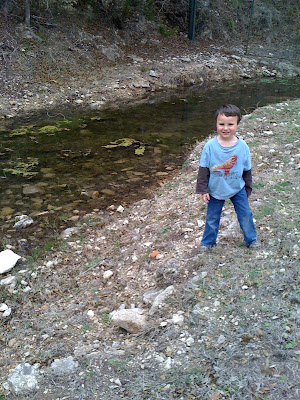 I love this picture of Harrison.  It truly captures who he is right now...confident, free, and on a big adventure called LIFE.  Man, I like this little boy! 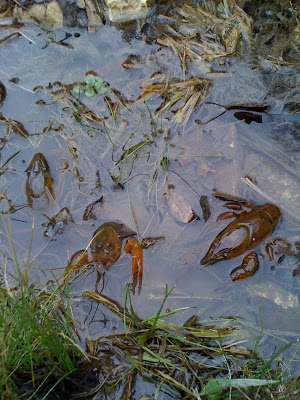 This is the one Harrison named Crawly.  Who could resist those eyes?  I think that look is him telling us thank you.  Thank YOU, Crawly, for letting us practice a little kindness on you today!
Posted by Outside Lisa at 2:00 AM