Today, Emerson had to get tubes in her ears. Too many ear infections in her 14 months of life. We are really hoping this procedure, called bilateral myringotomy, will keep her from going down the same road as her big brother. Harrison got close to having to get tubes three times and we never ended up doing it because he'd make it to the late Spring and get better. He never had problems all Summer long and we'd think he was in the clear, but inevitably, every Fall his allergies would kick in, the drainage would end up in his ears, and he'd get an infection every six to eight weeks. He seems to have outgrown the chronic ear trouble, but I think all of the infections have affected his hearing. Hopefully, Emerson will have a much easier time now. 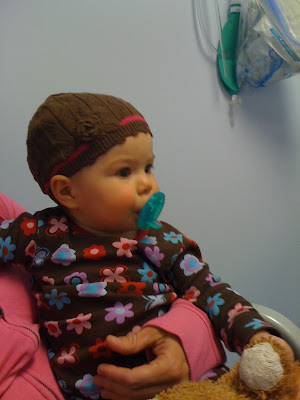 Here she is in the waiting room bright-eyed and bushy-tailed in her pajamas. We had to be at the hospital at 6:25 a.m. She couldn't eat after midnight, so I was so afraid she'd wake up starving like she usually does and then be miserable the whole morning. There was so much going on and so many new people to watch, she never complained once! 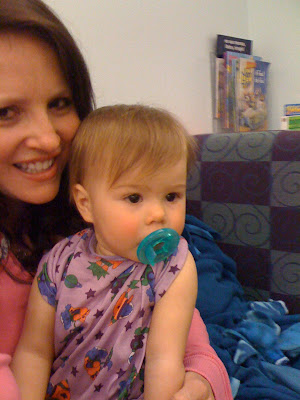 Her purple gown was really kind of cute on her and she matched all of the other boys and girls awaiting the same fate. They were all so funny with their little diapers hanging out the opening in the back! 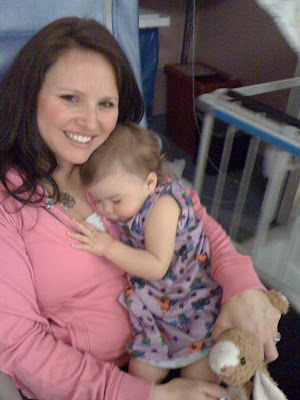 This is yet another holding area. She fell sound asleep and I had to wake her up to get a spray of goofy juice up the nose. They give them something that makes them really loopy so they won't have any separation anxiety when they have to leave their mommies and get wheeled away by a complete stranger. There were probably six other children hopped up on the same drug in the same room and it was hilarious! Emerson always waves and says, "Hi!" to people who pass and this morning with this drug in her little system, she could only muster a one fingered half wave and a very slurred, "HHHiiiiiiiiiiii." It was the cutest and funniest thing I have ever seen. 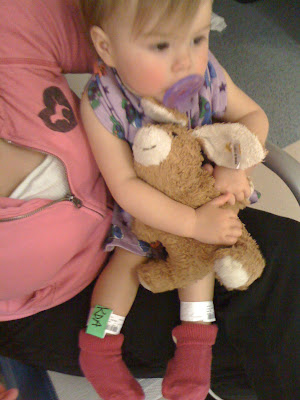 Here she is, eyes glazed over, holding her brother's beloved bunny rabbit, Robby. She had a monitor on her big toe that glowed red through her sock and a hospital band on each little ankle. I was so nervous and praying very hard at this point that she wouldn't be upset when they took her from me. They called her name and brought in her bed. I laid her down, snuggled Robby up tight, and gave her a couple hundred kisses and they wheeled her down the hall. She didn't make a peep!
By the time I walked to the next holding pen and called Roger, her doctor came out and said he was finished and she did fine. It literally took him like two minutes. What cost us about $1500, four hours of pre-registration and waiting, extreme hunger, and a LOT of stress, took him two minutes! Wha?
I was summoned to the recovery room where I found my tiny angel crying in the arms of a stranger. I grabbed her up and hugged her close and she proceeded to WAIL. She may be small, but the girl is WYLIE! And at this moment she was like trying to hold down a bobcat and they wanted me to make the bobcat drink apple juice! I mean she was MAD. I was concerned, and when the attending hospital staff became concerned, I was worried she was having a bad reaction to the anesthesia or something. Luckily, Roger was on his way into the hospital and made it to the recovery room before the nurses called back the doctor and anesthesiologist. All she needed to make her all better was a good dose of Daddy! He held her close and she was purring like a kitten in a matter of seconds...not minutes...SECONDS! Go figure! All I can say is I'm really glad that's over with and our baby girl is okay and back to her sweet little self.
Posted by Outside Lisa at 12:42 AM