The First Day of School

I am sitting in bed while I type this watching the sun rise up over the hills and watching Roger and the boys load into his truck to head off to school.  My little honey is still sound asleep next to me.  We made it through the first day of school yesterday.  Four kids in four new schools.  So much has changed in our family in the past month and all of the children are handling it so well.  I set up a Skype account so Dylan, our daughter who is a freshman at UT, and I can chat while watching funny, contorted versions of our faces on the screen.  Skype is amazing!  I was able to call her up and put her at the dinner table with us yesterday evening.  We visited with her while we ate our roast beef, mashed potatoes, green beans, and biscuits.  It was great and very difficult to say goodbye.

Roger took Billy and Jackson to school and he was able to talk to Jackson's football coaches.  Thankfully, forgetting about the meeting this weekend wasn't the end of the world after all!  If they wouldn't have allowed Jackson to play football because we weren't at that meeting, I think he would have just died.   It seems like the boys had an okay day at their new schools.  If you ask them they say they hate it, but their body language and good attitudes show otherwise.  I know they just need some time and most importantly Jackson needs the chance to make some friends.  He didn't have football before the first day of school like Billy did, so hasn't had the same opportunity to meet people.  He walked into that school cold turkey and that takes guts.  I am very proud of both of them.  Oh, no...I am now watching Roger speed back into our driveway.  One of the boys must have forgotten something! Yikes!


Anyway, back to the first day of kindergarten... 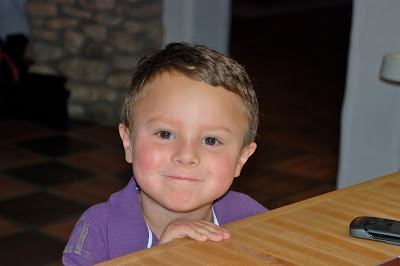 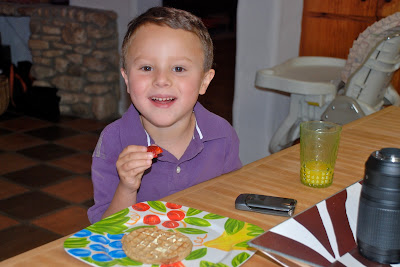 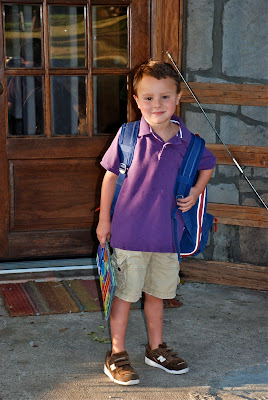 Harrison was in HIS bed and asleep by 8:15 Sunday evening.  GO TEAM!  (It helped that my parents took Emerson to stay with them this week) He woke up bright-eyed and bushy-tailed, got himself dressed, and had a breakfast of waffles and strawberries (our school morning staple).  He got a little nervous and had to make a run to the bathroom before we made it out the door, but with that out of the way, he was fine and off we went. 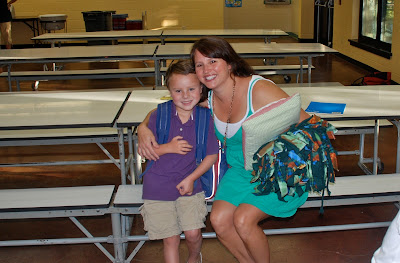 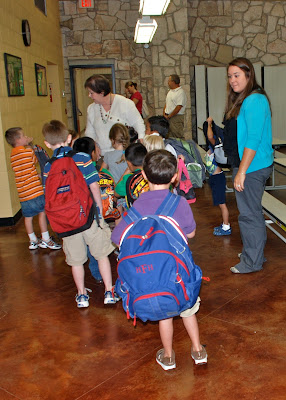 His class meets in the cafeteria each morning and then his teacher leads the children to the classroom.  We were both great until that dang walk to the classroom.  I don't know if it was the procession of principals and superintendent or the presence of so many older kids in the hallway, but something happened about halfway to the kindergarten classroom.  Thinking back, I see it all unfolding in slow motion.  Like in the movies when someone dies and they go to Heaven and are greeted by all of their loved ones who have already passed.  That was the scene.  So...halfway down the hallway, I was overwhelmed by this rush of emotion and tears started welling up in my eyes.  A split second later, Harrison, who was walking about ten feet in front of me, turned around and with a very grave look said, "Mommie, I need you!"  Of course, at that moment I had to shake off my bad feeling and put on a happy face and say, "You're gonna have so much fun, Bubbie.  You'll see.  Don't worry."  I hugged him and held his hand the rest of the way.  I wonder if I sensed his bad feeling or if he sensed mine OR if it was just a huge coincidence that we both went down at the same moment.  I like to think it's that we are so close and in tune with one another, that we felt each other's unease and reacted simultaneously.  Either way, I am so proud of that boy (and myself) for making it through that moment. 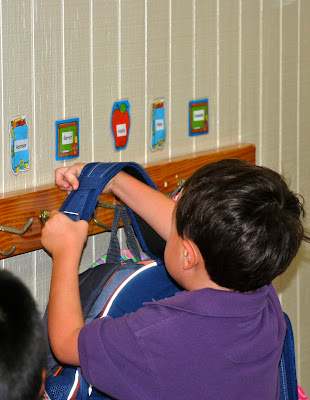 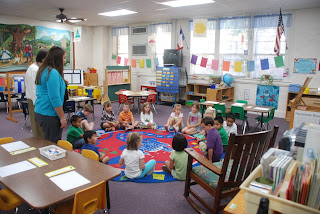 Once he was settled into his classroom, I slipped out, realizing that this wasn't pre-school at the church in Fort Worth any more.  This is real school and mommies with big cameras hovering around are ...well...not so cool.  I crawled into my car, took a very deep breath, and cried...just for a moment.  That's all I needed...a moment.  My baby boy started school today. 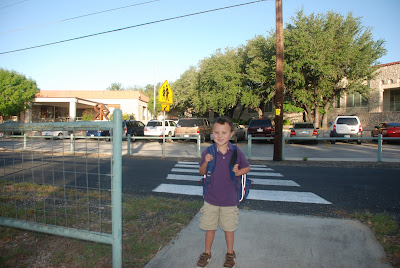