Have I mentioned that I have five kids.  There are some of you out there who could say, "Actually, you have two kids and three step kids."  To you I would have to say, "Bite me!"  I absolutely, positively, without a doubt have five kids.  Otherwise, my time, my mind, my money, and my heart would not be divided by five like it is.  It takes EVERYTHING we've got to feed, care for, pray for, worry about, and dicipline this gang of very awesome children.  I can't IMAGINE what it would be like if they had any issues, disabilities, diseases, or behavioral problems.  These are five healthy, normal kids and it takes ALL that we have to keep up.  But I don't want to just keep up.  I want to be GREAT!  I think I need some vitamins or something.

I just got off of the phone after talking to my stepdaughter, Dylan, who is a freshman in college.  I SO wish that I could say that she's doing great and loving every minute of it, but that would be far from the truth.  She is down in the dumps, hating Calculus, missing friends from high school, missing her home town, and so badly wanting to find her place in the world.  The hard thing for me is that I can make suggestions, I can encourage her to hang in there, to work hard and concentrate on her studies and tell her that things will get better, but I can't hug her or make choices for her or step in and make things better for her by waving my "I don't take no for an answer" wand.  She is out there in the big world and feeling misplaced, misunderstood,  and miserable.  It's killing me.  This is supposed to be such an exciting time for her and instead she is disappointed.  I know that things will turn around and she will eventually adjust, make some friends, and find success, but she doesn't know that and there is nothing I can do to make her understand it.  I just have to stand back (crash pad at the ready) and let her make her way.  It's torture!

Billy, who has transitioned beautifully into his new school and town, is suddenly finding that he is going to actually have to APPLY himself in school or he's not going to make his grades.  Tomorrow is the end of the first three weeks and progress reports will be coming home.  The thing that has been such a brilliant catalyst for him making friends, football, will be stripped away if he doesn't pass everything.  His father and I can help make sure his homework is done, hound him about missing assignments and low grades, and nag 'til we're blue in the face, but we can't MAKE him listen and ask questions in class.  We can't MAKE him be responsible enough to turn in all of his assignments.  We can't MAKE him be an organized person.  All we can do is try to explain to the best of our ability that failing will be humiliating and devastating for him and that we're just trying to protect him from having to experience that awful setback.  After a lot of talking and arguing tonight, he asked for a day planner and admitted to himself and to us that he is NOT giving school his best effort and that he wants to try harder and do better.  He has always managed to pull himself and his grades up in the past.  I pray he can make it happen this time, too.  I will purchase a planner for him tomorrow and we'll continue to worry daily about his grades.  He has four years to go before graduation.

Jackson just experienced a devastating setback a week ago when he injured his knee badly in football practice.  Things were really looking up for him the day before the accident when the coaches told him he was moving up to the "A" team and playing running back, a position he'd hoped he'd have the chance to play.  A hard blow to the knee in the last play of practice changed everything.  He is on crutches now, watching practices from the sidelines, unsure of how long it might be before he returns to the field.  I can't tell you how hard it has been to watch all of this unfold.  Jackson is tough, but no kid should have to endure something like this.  I am so proud of him for keeping a good attitude and not letting this adversity get the best of him, but he still has a long way to complete recovery.  If only we could somehow make it all better for him.

Harrison is being picked on at school by a kid in his class.  He tells us stories daily of how this child hits him, scratches him, and pushes him.  Yesterday I spoke to the teacher about it and she moved the kids around hoping this would help the situation.  It took me a while to even mention it to her because I really expected it to be a short-lived scuffle that would work itself out.  You know...boys being boys.  But yesterday he came home with a scratch on his nose and today a scratch on his eye.  It seems that these scuffles are taking place not in the classroom, but at P.E.  Of course, I had to be careful that Harrison himself was not the one causing the skirmishes.  I fear now that Harrison's retaliation toward this child may be worse than what the child is dishing out to him.  After all, Harrison is a self-proclaimed ninja.  I hate that this is happening and I WILL get to the bottom of it eventually, but I can't be there at school with him to protect him.  This is something he has to deal with and I was very impressed with his own proposed solution when his daddy and I talked to him about it tonight.  He decided that he will just "have a talk with" the kid tomorrow and tell him he "doesn't want to fight him anymore, he just wants to be friends".  Thank God he's got this one figured out.  Roger was asking "how big an ol' boy the kid's dad is" and I have been telling Harrison to "tell the teacher" or "scream loudly at the kid to stop so the teacher hears and can step in".  Boy are we dumb.  We'll see how the "talk" goes tomorrow and if that doesn't work, I'm gonna send in the big guns (Roger) and I guess I'll pack him a lunch, just in case.

Emerson...well...I think she just may be trying to kill me.  She is 20 months and 20 pounds of D-I-N-O MITE!  How can something so cute and petite be such a PISTOL?  She's like a wolverine in kitten's clothing.  You know in the movies when someone walks up to the cute, soft, furry, wide-eyed little cuddly kitten and says, "Here, kitty, kitty.  Come here sweet little kitty baby" and then the thing suddenly pounces on them embedding it's claws into their head, hissing, and screeching?  That's my baby girl.  Yes, I'm exaggerating, but not much.  Crossing her in public is terrifying because she is like BANSHEE loud when she gets mad.  So we're like, "Here little kitty...eat the tasty lollipop.  How about some Skittles, or a pony?"  Anything to make it STOP.  I could take Harrison anywhere when he was this age...the movies, a concert, a restaurant...not Sister...or at least not without having my butt cheeks clinched so tight they feel like they're gonna fall off from such extreme stress the entire time.  The difference, I think, between her and Harrison is that Harrison cared what I thought and didn't want to disappoint me.  Emerson, on the other hand, does not let this concern her pretty little self.  She is just fine.  And I'm sure I'll love this quality in her some day in the distant future, but for now...I'll keep my purse stocked with candy and look at family outings as my only chance for a nice butt.

On that note, I'm gonna go collapse into my bed (with my sweet (sleeping) angel baby girl) and try to rest up for what tomorrow may hold.  By the time you're reading this I could already be wearing a kitten skin hat. 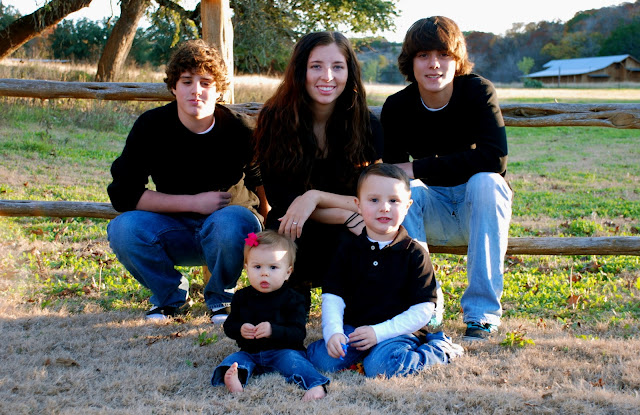 Gang of Five
They may divide my whole being by five, but the joy they bring to my life is multiplied by infinity.
Posted by Outside Lisa at 2:29 AM